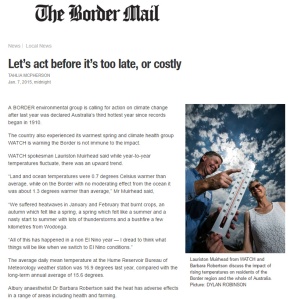 The WATCH media release below resulted in an article in the Border Mail newspaper today (7 January 2015).

The year 2014 is potentially the hottest year on record across the world according to figures from the National Oceanic and Atmospheric Administration.

“Globally it’s almost certain to be declared the hottest year on record with land and ocean temperatures  0.7 degrees Celsius warmer than average, while on the Border with no moderating effect from the ocean  it was about 1.3 degrees warmer than average,” said Lauriston Muirhead, spokesperson for Wodonga Albury Towards Climate Health (WATCH).

The average daily mean temperature at the Hume Reservoir Bureau of Meteorology weather station was 16.9 degrees in 2014, compared with the long term annual average of 15.6 degrees.

“Whether it’s the hottest, second or even third hottest on record is immaterial – the fact is there’s a strong warming trend – the land, the oceans and the atmosphere are warming and the Border is not immune. We suffered heat waves in January and February that burnt crops, an autumn which felt like a spring, a spring which felt like a summer and a nasty start to summer with lots of thunderstorms and a bushfire a few kilometres from Wodonga. All of this has happened in a non El Nino year – I dread to think what things will be like when we switch to El Nino conditions.”

Albury anaesthetist Dr Barbara Robertson is in her 50s and clearly remembers her mother talking about climate change when she was a child. “Mum was aware of global warming all those years ago. We lived in the western district of Victoria and she told me how it would affect agriculture in our region. Her predictions have all been coming true. Back then farms in my area were mostly sheep, cattle and oats, but with rising temperatures and dropping rainfall people like my brother have switched to farming wheat and canola.”

Mr Muirhead also remembers learning about climate change in the 1970’s. “Barbara and I have been aware of this threat for around forty years. It’s incredible how slow our government has been to take action.  Let’s make 2015 the year they start taking it seriously. The federal government is handing out over 10 billion dollars of tax payers money per year in fossil fuel subsidies that promote pollution and warming but is only allocating $2.5 billion to the Direct Action Plan to reduce pollution – it’s madness and will only perpetuate the current warming trajectory.”

Dr Robertson said her parents instilled the importance of minimising their footprint on the world – a philosophy she too wants the Abbott Government to adopt.

To leave a reply, please include your real name, position and/or institutional affiliation, followed by your comment. Comments not accompanied by these details will not be published. Cancel reply