Malaria, dengue ‘on their way with climate change’ 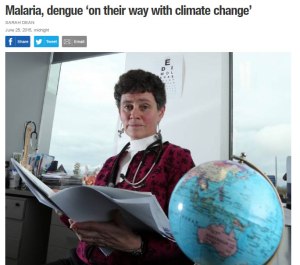 AN Albury doctor yesterday warned that climate change would introduce new diseases to the region.

Even malaria would become a threat, she said.

“We don’t yet have malaria in Australia, but if the climate continues to alter, we’ll have it in Australia,” Dr Saxton said.

She agreed with a report in the medical journal, The Lancet, this week that found climate change was the greatest threat humanity faced.

On the bright side, the The Lancet Commission found that while the threat continued to be underestimated, tackling it provided be a huge chance to improve health.

It talked about the direct health impact of the increasing frequency and intensity of extreme weather events.

And it discussed the impact of changes in infectious disease patterns, air pollution, and malnutrition.

One of the authors said the health threat was so great it could undermine 50 years of gains for global health.
See your ad here

“We need to act urgently — we have a narrow window to turn it around relatively easily,” the report said.

“The longer we leave it the harder it will be.”

The report follows a major call to action by Pope Francis, who last week warned the earth was becoming an “immense pile of filth”.

Dr Saxton said fear was at the heart of climate change, as it was with any disease.

“Doing nothing about that fear leads to a sense of helplessness that engenders stress,” Dr Saxton said.

To leave a reply, please include your real name, position and/or institutional affiliation, followed by your comment. Comments not accompanied by these details will not be published. Cancel reply